Lift Weights For A Long Life 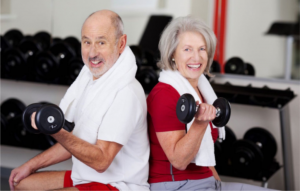 It’s common knowledge that those who are of an ideal weight and size tend to reduce their risk of serious illness and disease. This usually results in a healthier and longer life span. Restricting food intake has proven to be effective for weight loss and improving life span – but only as long as major surgery wasn’t involved.

With the rate of life-threatening diseases such as cancer, liver disease, CV disease and Diabetes sky-rocketing, the likelihood of a person requiring major surgery at some stage of their life is much greater now than it was 50 years ago.

Recent research has shown that the dominant factor in determining longevity isn’t body weight but rather muscle mass, especially after major surgery.

Researchers at Rotterdam University followed hundreds of patients who had undergone surgery for aggressive colorectal cancers and liver transplants. They discovered that 44% of patients suffered from sarcopenia (a degenerative loss of muscle mass and density). Patients in this group were more prone to surgical complications and had additional surgeries 2.1 times more often than patients with a healthy amount of muscle mass and density.

The study concluded that those who go into surgery with a healthy amount of muscle mass experience much higher recovery and survival rates with fewer on-going complications.

The lead researcher writes: “Low muscle mass is associated with increased age and disease, such as cancer and liver disease. Considering the increasing age of the population, the increasing incidence of cancer, the remaining shortage of donor livers, and the increased surgical and medical treatment options, muscle mass could be an important addition used for risk assessment. Moreover, it may be a therapeutic target to improve treatment outcomes.”