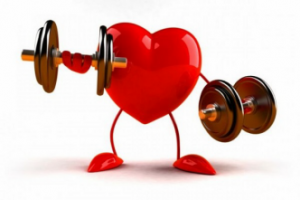 It has been a long-held belief that doing aerobic endurance based exercise was the best form of exercise for preventing and treating congestive heart failure (CHF).

However, recent studies out of Luxembourg have shown that resistance strength based training is just as, if not more, beneficial as a means of restoring health in patients with debilitating conditions such as CHF.

A combination of endurance and strength training proved to be far superior to endurance training alone in improving several markers of cardiovascular function as well as strength in CHF patients.

While strength training for the heart failure patients was initially thought only to restore strength levels (which had dropped as a result of surgery and inactivity), this study demonstrated that 30 mins of strength training and 30 mins of aerobic cycling three times per week was superior to aerobic training alone as it improved critical markers of cardiovascular health such as left ventricle function and peak oxygen uptake as well as functional strength.

It appears that testosterone fulfills a protective role when it comes to heart health and function. Resistance strength based exercise has proven to be a great natural and safe way to elevate testosterone levels so, regardless of whether you are male or female, we highly recommend you include some resistance training into your weekly routine.

A strong heart is a healthy heart!