Is Sitting The New Smoking? 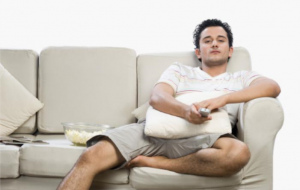 A study from the American Cancer Society finds a link between long periods of time sitting and a higher risk of death from all causes, including 14 of the 22 causes of death measured by the study. This includes 8 of the 10 most common causes of death. Risks of death among those who reported the most time sitting were higher from cancer, coronary heart disease, stroke, diabetes, kidney disease, suicide, lung disease, liver disease, peptic ulcer and other digestive disease, Parkinson’s disease, Alzheimer’s disease, nervous disorders, and musculoskeletal disorders.

As technology has advanced during the last few decades, sitting time has increased. One Australian study estimated that on average 90% of time was spent sitting, and more than half of that sitting time was spent on the computer or watching TV. Previous studies have shown that prolonged sitting time raises risk of death even for people who get healthy amounts of moderate or vigorous physical activity when they aren’t sitting.

According to lead author Dr. Patel, the study adds to the collective body of evidence that reducing sitting time is important for a healthy lifestyle. She said, “Advances in technology have encouraged us to be sedentary, so we need to be mindful about finding ways to reduce sitting time.” Patel says adding a few minutes of activity to break up sitting time throughout the day at work and during leisure time can add up. She suggests: