Does Too Much Protein Really Get Turned Into Fat? 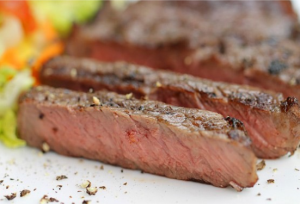 Aside from building muscle, protein provides essential amino acids that serve as the building blocks for other proteins, enzymes, and hormones within the body that are vital for normal functioning.Without this steady supply of amino acids, the body resorts to breaking down its own proteins; typically from muscle in order to meet this demand.

Over half of all the amino acids ingested (in the form of protein) are bound for and taken up by the liver. The liver acts almost as a monitor for absorbed amino acids and adjusts their metabolism (breakdown, synthesis, catabolism, anabolism, etc.) according to the body’s metabolic state and needs.

Protein consumption has its share of misconceptions. It’s not uncommon to hear claims that dietary protein eaten in excess of some arbitrary number will be stored as body fat. While the metabolic pathways to convert amino acids to fatty acids do in fact exist in the human body, the fact of the matter is that under almost no circumstance will this ever happen.

You have probably heard some guru tell you that “The average person can only absorb 30 grams of protein at one sitting. Anything above that will be stored as fat.” Statements such as this a nonsensical, after all how are you supposed to convert and store 10 grams of excess dietary protein as body fat if you can’t even absorb it in the first place?

In the face of larger protein and caloric intake, the stomach reduces its rate of gastric emptying in order to more slowly supply the gut with incoming amino acids (larger meals take longer to digest). Moreover, the gut itself will slow motility as to increase the time nutrients are available to be absorbed.

The bottom line is that the stomach will take its sweet time to release amino acids into the gut where they can be further detained and subsequently absorbed into the body/circulation. Without this tightly orchestrated process, we as a species would have died off long ago. Having to consume intricately measured 30g protein meals, multiple times per day in order to effectively derive the nutrients from our food just wouldn’t have cut it.

The statement that all excess protein will be stored as fat ignores recent evidence. Enter one of the most tightly controlled studies of our time… In 2012, George Bray and his colleagues sought to examine whether the level of dietary protein affected body composition, weight gain, and/or energy expenditure in subjects randomized to one of three hyper-caloric diets: low protein (5%), normal protein (15%), or high protein (25%).

Carbohydrate was kept constant between the groups (41-42%), with dietary fat ranging from 33% in the high protein group to 44% and 52% in the normal and low protein groups, respectively. Lastly, during the course of the 8 week overfeeding period, subjects’ body composition was measured bi-weekly using dual x-ray absorptiometry.

At the end of the study, all subjects gained weight with near identical increases in body fat between the three groups. (In actuality, the higher protein groups actually gained slightly less body fat than the lower protein group. This, however, wasn’t significant). The group eating the low protein diet gained the least amount of weight (3.16 kg) with the normal and high protein groups gaining about twice as much weight (6.05 and 6.51 kg, respectively). 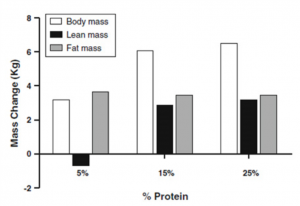 These subjects were literally forced to eat ~1,000kcals more than what they needed to maintain their body weight for 8 full weeks, and even then it was seen that the protein contributed to increases in lean body mass rather than body fat.

So, while we do biochemically possess the pathways needed to convert amino acids to fatty acids, the chances of that ever happening to a significant degree during slightly higher protein intakes, even in the face of adequate energy and carbohydrates, are irrelevant given what we know about the extreme measures that need to be surpassed in order for any appreciable fat gain from protein to take place.

Rather, excess protein in the face of over-feeding actually contributed to gains in lean body mass. Quite the contrary to what text books and gurus might preach. And as all avid readers of our newsletters would know, increasing lean muscle tissue really is the fountain of youth.

So, the next time you find yourself wondering if you’re eating too much protein in each meal or over the course of your day, rest assured that you aren’t and that it is in fact helping you achieve your health, wellness and fat-loss goals.