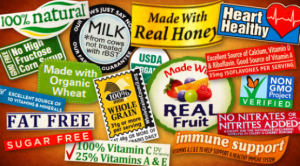 ded by food companies with slick marketing in an attempt to sell us ‘healthier versions’ of what we deep-down already know is unhealthy food aka: Franken-foods.

Low-fat chocolate, low-carb beer, high-protein cereal, Vitamin-D-fortified bread, preservative-free lollies, sugar-free fizzy drinks and low-sodium crisps. I’m sure you can think of dozens of other examples.  It’s this kind of ingredient manipulation and slick marketing that sadly fools most people into thinking that they can now consume these types of foods and drinks and not be any worse off. After all, why would a food company lie to us? Don’t get me started…

Once we accept the fact that food companies are just doing what food companies do (prioritising profits above all else, even your health), we can then begin to change our thinking and behaviour towards these types of foods.

The main problem with these Franken-Foods and drinks is that many people then feel justified to consume them on a regular, sometimes daily, basis (rather than once in a while as a special treat) because they don’t seem as bad as the real thing. And this is exactly what the food companies want you to think. If you consume these products more often they in turn generate more profits.

I’m sorry to burst your bubble folks but consuming these ‘healthier’ versions of unhealthy foods is doing you so much more harm than you could imagine. It really is just a marketing ploy and it appears to be working.

So what’s the solution? I recommend that you eat the proper versions of franken-foods. Yes, you read that correctly. BUT, as you’re eating your full fat chocolate and drinking your carb laden beer, take full responsibility for the decision to consume such foods even though you know full well how unhealthy they are.

Why? Because admitting to yourself that YOU made the decision to eat something unhealthy puts you in charge. You’ll become an educated and in-control consumer. You’ll then be much more likely to reserve these foods only for special occasions and as once-in-a-while treats, which is exactly what they should be. Plus, eating them only occasionally rather than as part of your daily diet will allow you to appreciate and enjoy the taste so much more.