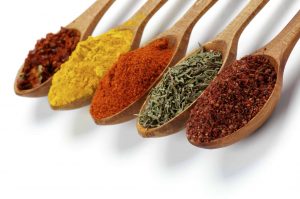 r suffered from fluctuating cravings, mood, concentration and energy levels during the day it could  be that your blood sugar levels are on a constant roller coast ride. Herbs may very well be able to help.

Usually caused by eating too many processed carbohydrates and sugars, blood sugar levels rise rapidly and the body responds by releasing large amounts of the hormone insulin from the pancreas into the blood stream.

Insulin’s job is to keep blood sugar levels in a healthy range but after years of carbohydrate and sugar abuse, insulin and the cells it is meant to work with lose their effectiveness. Insulin resistance soon follows and Type II Diabetes won’t be too far behind.(The serious health risks associated with both of these conditions are well known and therefore won’t be covered in this article.)

Cinnamon contains compounds that promote insulin function, allow cells to use glucose more effectively and slow gastric emptying. Try adding a quarter teaspoon to your coffee and tea, or just about on anything really.

Turmeric contains a compound called curcumin which has shown to be more effective than the diabetes drug Metformin at encouraging cells to use glucose efficiently. Turmeric can be consumed as a supplement or as an ingredient in your recipes.

Chili powder can lower the amount of insulin required to process sugar in a meal by as much as 24%. Chili can also increase the production of compounds that clear insulin from the liver.

Ginger has been shown to decrease fasting blood sugar levels by 10.5%. Try adding ginger to your hot drinks, smoothies and soups.

Cumin Seeds have been shown to reduce blood glucose levels by as much as 62mg/dl. Try using them as a rubbing marinade on meats.

There’s no need to suffer the risks and symptoms of wildly fluctuating blood sugar levels. Whilst taking steps to clean up your diet, try adding some of these wonderful herbs to spice up your health.